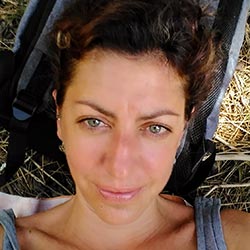 Rocío is a journalist, writer and singer-songwriter. As a BA in Communication, she has worked in national-wide media for 25 years in Buenos Aires, Argentina, as a radio producer, writer and general editor in news sites, a writer in news magazines and blogs, and producer of some of the most viewed television news programmes of Argentina. She is a Spanish native speaker, has an advanced level of English and a proficiency level in Italian and Portuguese.

She has trained producers and journalistic writers and has been a teacher of Narrative Journalism, Online Journalism, Practices of Journalistic Discourse and other subjects in different national universities.

She has travelled all over her country since she can remember. Later, for longer journeys, she chose the Córdoba’s hills and streams of La Cumbrecita, and the beaches and pine forests of the Atlantic Coast of Buenos Aires. She guides there and in other places of her country as a Forest Bathing Guide and Forest Therapy Practitioner.