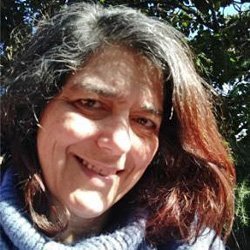 Rita was born in Lisbon in 1973. She studied cello, having attended the National Conservatory. She later studied Applied Chemistry (FCT-UNL) before dedicating herself entirely to ceramics, sculpture and painting, areas in which she has been exhibiting collectively and individually, having trained at Ar.Co, in Almada.

As an Art-Therapist, she has developed projects with children at the O Século Foundation and with the elderly at the Alzheimer Portugal Association and the Day Centres of Santo António and Nossa Senhora do Carmo, in Estoril. She is an Art-Psychotherapist, effective member of SPAT, where she gives training and online consultations in Portuguese and English.